Do you love travel trailers? Do you want to experience and enjoy RV the lifestyle but don’t want to buy a motorhome? Well, you don’t have to, as there are various possibilities to enjoy the RV lifestyle.

Truck campers and travel trailers are great to have, and the majority of travelers prefer to have them because of their smooth and easy towing abilities. Travel trailers or campers don’t require you to spend extra to buy a big vehicle just for towing your travel trailer.

One of the most used and popular full-size trucks on the market that you can easily find is Ford F150. It is an excellent pick to tow your camper or travel trailer. Moreover, you can also use your tow vehicle for transportation.

However, it doesn’t mean that an F150 can pull anything you want as it also has some limits, and if you exceed those limits, you might run into some severe safety issues.

The latest models of F150 can easily pull a travel trailer weighing up to 8,000 lbs, which includes gear weight. But if you have an F150 truck with a two package and right trim level, it can easily tow up to 13,000 lbs.

In this post, I’ll discuss how much an F150 can tow? What size travel trailer can an F150 tow? And other relevant questions that you have in your mind. So, let’s get started!

What Size Travel Trailer Can an F150 Pull?

As I’ve already stated above that a right trim level F150 can pull a travel trailer weighing up to 10,000 to 13,000 lbs. Before hitting the road, make sure that you haven’t surpassed the maximum payload capacity to avoid any danger.

If you try to surpass the maximum towing limit of F150, it will badly affect both your vehicle’s brakes and engine. Your vehicle brakes will fail if it beats the capacity.

Before hitching the travel trailer to your F150, double-check the GVWR of both your towing and towed vehicle. Regardless of what model you have, F150 can pull a camper weighing up to 6,000 lbs. while some F150 models with a tow package can pull up to 13,000 lbs. 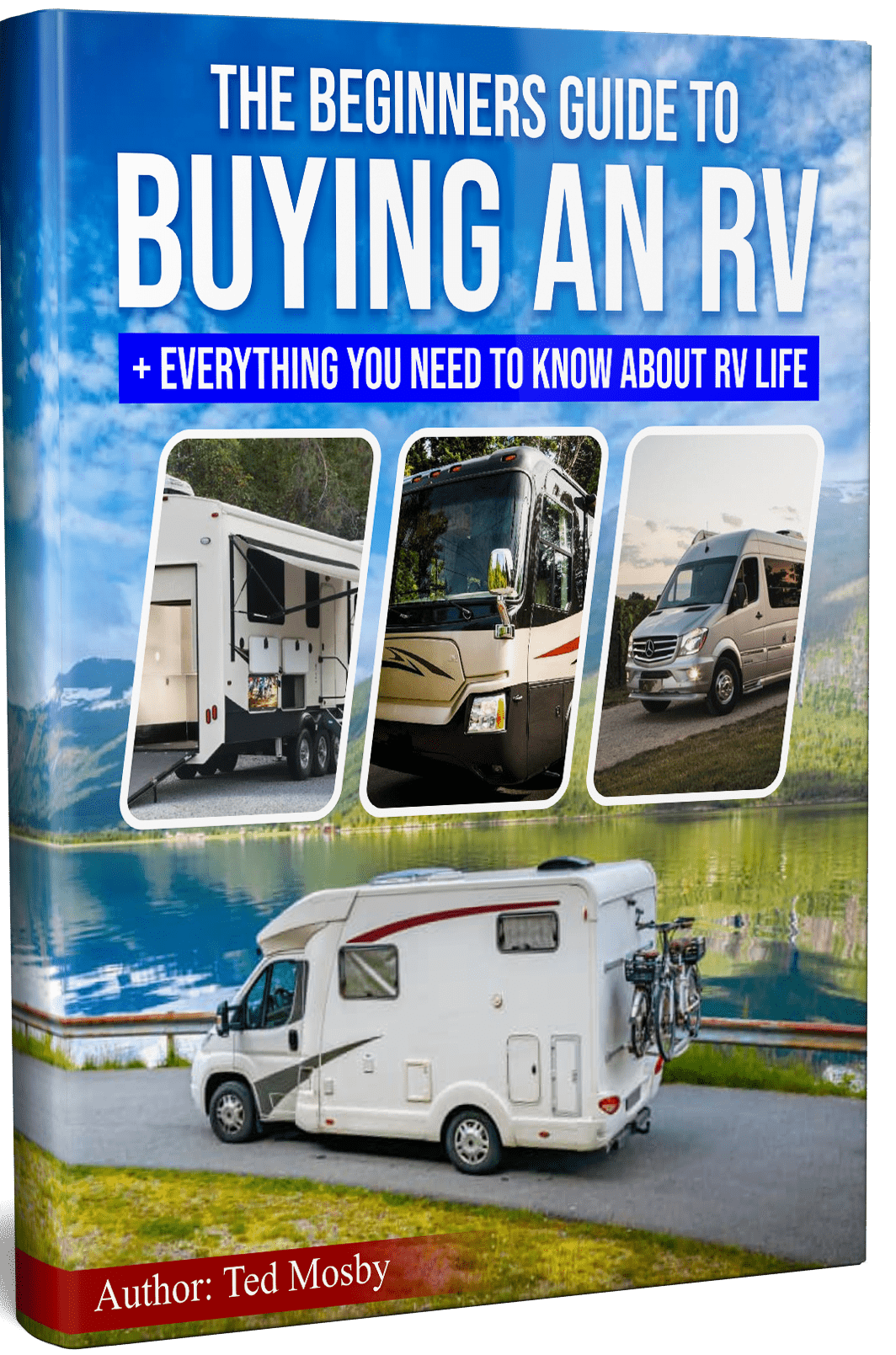 Are you tired of Googling and researching information regarding RVs?

Then Grab this easy-to-read illustrated eBook. This eBook will cut out all the confusion and give you straightforward information so that you can make an informed decision and you can save $$$$ and time with the information mentioned in this eBook.

Also, this eBook will help you understand RV Life and help you with the journey all the way. Ford F150 is a half-ton truck, but it doesn’t mean that it is the only option that you have got, as you can find other half-ton trucks as well, such as Toyota Tundra, Ram 1500, GMC Sierra 1500, Nissan Titan, and Chevrolet Silverado.

The majority of people don’t know what does it mean to a half-ton truck, especially if you are new to RVing. It doesn’t mean that a half-ton truck is a vehicle that weighs half a ton. The half-ton term is for vehicles that offer a payload capacity of nearly or more than half a ton.

Related Post:  How to Remove Oxidation from RV Fiberglass?

The payload capacity is a critical aspect as it determines the towing capability. Nowadays, you will find many half-ton trucks with significantly higher payload capacity than half a ton. It is worth mentioning that half-ton pickup trucks generally come with a tow package and have the capacity to tow up to 13,000 lbs. This towing capacity means an empty travel trailer and doesn’t include gear or passenger weight.

However, in reality, a half-ton truck like F150 can safely tow up to 8,000 lbs, including gear and passengers.

Ford 150 has various models. Its latest models in 2020 with different basic configurations include;

The XL model of F150 is the standard model, while the Limited model offers all the bells and whistles. All other models provide different configurations, features, and combinations that may come as an option or include as standard.

When talking about rough terrain driving abilities, the Raptor model is unbeatable as it has a more powerful engine.

Payload capacity means suspension and weight box capacity. It also greatly impacts tongue weight which can be defined as the weight that the hitch puts on a half-ton pickup truck like F150. Moreover, the hitch weight is also relevant to the weight of the travel trailer and how that weight is being split within the camper.

Are you tired of Googling and researching information regarding RVs?

Then Grab this easy-to-read illustrated eBook. This eBook will cut out all the confusion and give you straightforward information so that you can make an informed decision and you can save $$$$ and time with the information mentioned in this eBook.


Also, this eBook will help you understand RV Life and help you with the journey all the way. Click Here to Learn More

This gives you a smooth ride and prevents trailers from swaying away when driving off the grid. But you should also know that too much tongue weight will make your trailer hard to two.

Moreover, if you have a lightweight trailer and it has too much weight in its back, your travel trailer might sway out or start bouncing when you are driving at high speed or uneven trails. Another danger of placing too much weight on the tongue can make it split or crack which could cause an accident while you are driving.

So, you should never place a tongue weight of more than 20% of the overall weight of your trailer, including gear, to prevent these issues.

The average payload capacity of an F150 truck is about 2,000 lbs. So, considering the passengers and gear weight that you will carry in your F150 will be 1,000 lbs. It means you have only 1,000 lbs of payload weight left, which means the ideal tongue weight that a half-ton truck like F150 can handle is 1,000 lbs.

There are several aspects to determine how much an F150 can tow, such as Axle ration, Engine, Truck length, Truck weight, and towing package.

Well, to make things a bit simpler, here is the answer;

What is a Ford F150 Towing Package?

A towing package of F150 is an enhancement that includes towing hitch and other relevant components to increase the F150 towing capacity and to give you a better and smoother towing experience. You will find various F150 towing packages. The basic towing package is generally included in most of the F150 models. However, you can get some of them by placing an order.

Below, I’ve listed the details about F150 towing packages that you can check;

This F150 towing package is a basic one and is included in King Ranch, Lariat, Platinum. While it will be optional for F150 XL and XLT models. Here are the towing abilities of F150 with this towing package;

This package will include;

This tow package is an upgrade to what I’ve just mentioned above. This package adds a front stabilizer bar and an auxiliary transmission oil cooler. You will find it standard in Raptor, while other models have it as an option. The towing capacity of F150 with this package is up to 11,000 lbs.

Related Post:  How to Register a Bus as an RV or Motorhome

If you need heavy-duty towing, then this towing package is for you. This package is the right option only for 3.5L EcoBoost with a 3.55 or 3.73 electronic locking rear axle. This ultra-heavy towing package enables F150 to tow up to 13,200 lbs.

Factors That Affects the Towing Capacity of Ford F150

There are various factors that affect the towing capacity of F150. They include;

If you are wondering What Size Truck to Pull a Travel Trailer? then check this article that I have linked to.

That is all about F150 towing capacity and what size travel trailer can an F150 pull. I’ve listed everything, and I sincerely hope that you’ll find this post helpful. For queries and suggestions, you can write a comment below.

My Name is Ted Mosby from Cleveland, Ohio. I am a freelance Architect. I live in New Jersey, USA right now and I take my RV every alternate weekend. As I am a Freelancer I can work anywhere so most of my work is done inside my camper remotely.

Hi. I am Ted Mosby from Cleveland, Ohio. I am a freelance architect by profession but a camper by passion. I work remotely so I camp a lot in my RV. I own a Forest River Berkshire XLT Diesel 45A Class A Motorhome.